Since the last blog entry focused on Miss Atti and Simon the Terrible, resident Shop Cats at Thin Ice, this blog post will keep with the cat theme but talk about the regime change here at Thin Ice. Those who have been in, no doubt noticed the absence of Simon and the appearance of a new cat. Allow me to explain. The new Shop Cat is Lyra though she will also answer to Marshmallow. She is Simon's mom. That's the short story but now for the back story…

Hopefully all of you know the majority of the work at my store is handmade by local artists. As in 90% and I still get new local artists weekly (I've been open 11 years). One of the greatest surprises of opening my store is the relationships I have formed with my artists. I had retail experience prior to opening my own business but I didn't work with any of the vendors so I only knew of, and looked forward to, the relationships with the customers. But due to the locally handmade nature of my business, I don't just open a catalog of everything made overseas, fill out an order form and 6-8 weeks later a very well traveled box shows up with a bunch of made in China crap, er, stuff. On the contrary, on a weekly and often daily basis I have local artists walk into my store bringing with them the items they have made with immense skill, blood-sweat-and-tears and soul and trust me when I say it shows. But it doesn't stop there. Some of the artists go a step further and actually open their homes and studios to me, which are often the same place, for me to pick out new items for my store. To say this is an honor is an understatement. To be trusted with their art is in and of itself a huge honor but to be welcomed into their homes/studios is humbling beyond belief. Where am I going with this, you wonder? Lyra. The fluffy, rather rotund newish member of the Thin Ice team came to us thanks to just such an artist.


Donna Angelo of dna jewelry designs (check out her stuff here: www.dnajewelrydesign.com and dnajewelrydesigns.etsy.com ) is one of the aforementioned artists whose house/studio I get to visit when I am in need of new handmade, one of a kind jewelry.


On one such an occasion I drove to her house after work, strolled to the porch and greeted the cat sitting on the porch furniture thusly 'Oh hey Dusty'. No reply. Cats are so rude. The rest of the interaction went as follows, 'Wait, you're not Dusty'. Donna opens the door. 'Hey, yeah, check it out, that's not my cat. Doesn't it look like Dusty, though?’ As you may have deduced, the Dusty look alike is Lyra.


I adopted Lyra from Donna's porch in July 2013. and at the end of August she brought 5 kittens into the world.

I knew she was pregnant when I adopted her but she was so pitiful yet so sweet  I couldn't say no. Thus ensued equal parts mayhem and adorableness while the kittens grew, tested their boundaries, collectively peed on things, miraculously knocked over furniture far heavier than their tiny bodies and relegated me and my other cat (Mr. Darcy) to sleeping on the couch for 5 weeks. 5 solid weeks. Who's the boss in my household? Clearly not me.


4 of the kittens were adopted but I decided to keep Simon as he was really quite a troublemaker. I held the belief that because I'd been with him literally from day one I would have the most patience with him. He came to Thin Ice at 10 weeks and I thought he would settle into the life of a Thin Ice Shop Cat. Simon had other plans. He lived up to his troublemaker tendencies and then some. He broke inventory, a lot of inventory, and would then try to eat it (hide the evidence!) Glass ornaments, price tags, jewelry, you name it and he tried to eat it. Eventually it became apparent that the store life just wasn't for Simon so in November of 2016 I pulled the old switcheroo and took Simon home and brought his mom into Thin Ice.

It took a little while but by February Lyra started exploring and by March even went into the window for the first time! 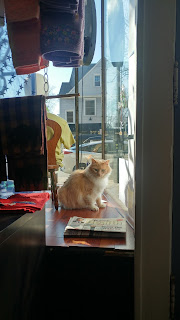 Now Lyra is very fat and very spoiled and very much loves her life as a Thin Ice Shop Cat.  She is settled into her new home and I'm quite sure there is no place she would rather be. 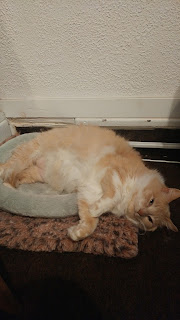 Thanks for tuning in to the story of the Thin Ice Shop Cats. Stop in and visit them when next you're strolling along Elmwood! You can pick up some great one of a kind locally made items while you're here! 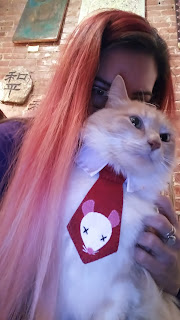 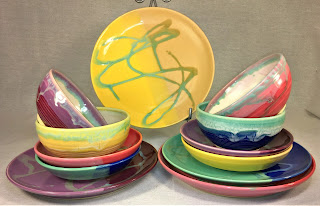 Everyday Earthware Dishware Sets Weddings. They're kind of a big deal. To two of the people in attendance they are the biggest deal. Here at Thin Ice we have the honor of selling a lot of wedding gifts and pottery is at the very top of gift suggestions we give. Bowl Bundle in all available color options Why? It's beautiful, functional, and meaningful. Everyone eats, right? So if you give a gift of pottery, every time the new couple uses it they will think of you and they will be reminded of the happiest day of their lives. It is highly likely that they will have the gifted pottery for years and years and may even pass it down to their children one day. All pieces are oven, microwave and dishwasher safe So you see why it is the top gift we suggest. We have many great artists at Thin Ice, most of them local. This wedding season one local artist has really set herself apart from the rest. Sarah (Bear) Cozzemera, of Everyday Earthware, a wildly successful local 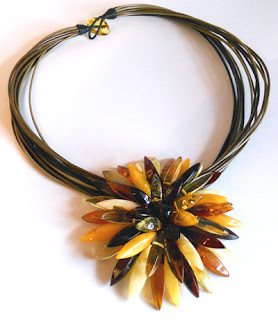 Approximately 90% of the items at Thin Ice are hand crafted by local artists and of that elusive 10% a mere five of the artists contribute to the extensive jewelry selection.  Amongst those five is the amber artist.  Why was an exception made for this lovely lady?  Two reasons- first, amber is predominantly found around the Baltic Sea which is, as you may know, not in Buffalo.  It's actually not even in the United States! (alert: forced geography lesson)  While not a requirement, the fact that the artist and her husband (Nataliya and Ihor) are from Europe means they are there more visiting family and acquiring the amber used in their jewelry, when they aren't at their home in Toronto.  The second reason an exception was made is because it's absolutely amazingly beautiful amber; well made, unique, and diverse.  Without further ado, I give you a few of my favorite pieces of amber, available at Thin Ice, 719 Elmwood Avenue, and also on the website at www.thiniceonline.com .